On Saturday morning, May 14, 2011, 116 students graduated from Brescia University during commencement exercises at the RiverPark Center. There were 1 associate, 89 undergraduate, and 26 master’s degrees awarded.

The 2011 Class Representative, Sagan Sette, gave a speech, completely written on her cell phone, elaborating how much she would miss every student, faculty and staff member. She then proceeded to snap a photograph of the graduating class, saying they will always remain friends via Facebook. 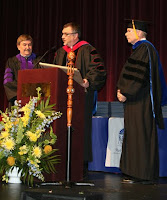 Brescia’s commencement address was given by James E. Voyles ’65. Voyles was awarded an honorary Doctorate of Humane Letters from Brescia University. He is pictured here with Fr. Larry Hostetter and Dean Jones, Chair of the Brescia Board of Trustees. Voyles, an attorney in Georgia, commended the 2011 graduates for their hard work and encouraged them to make their possibilities a reality.