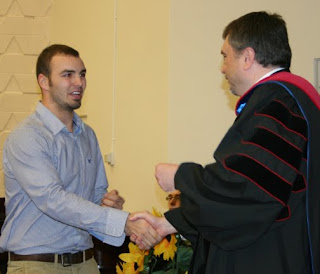 Brescia University celebrated Founder’s Day this year with a packed house during the Convocation and awards ceremony on Tuesday, January 25. 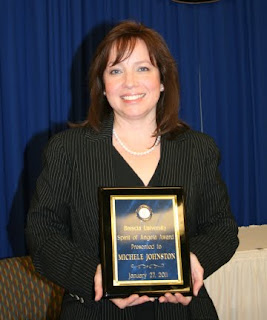 The 2011 “Spirit of Angela” recipients are Michele Johnston and Jason Ward. Michele is the first Brescia online student to ever receive this award. She is also the only woman in a class of 14 in Brescia’s online program for the Diocese of Pensacola-Tallahassee. Michele is studying theology in preparation for serving in lay ecclesial ministry. Michele drove up from Florida to accept the award personally. 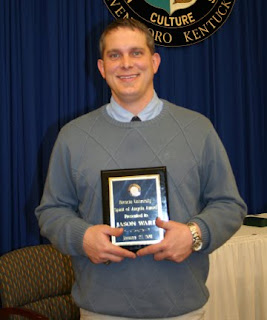 Jason Ward recently completed his student teaching and is now a substitute teacher in Daviess County, Kentucky. He is a husband, father and avid reader who has the gift of connecting scholarly content to adolescent interest. A fellow teacher said of Jason, “If you want a job done, you can bet [Jason] will work and work until it is done and done well.

The “Spirit of Angela” recipients are students who were nominated by faculty, staff or other students because they embody the characteristics or qualities that were evidenced in Angela Merici’s life. Angela Merici is the founder of the Company of Saint Ursula. It was the Ursuline Sisters who established Mount Saint Joseph Junior College, which was later moved to Owensboro and renamed Brescia College. In 1998 it became Brescia University.

Fr. Larry Hostetter delivered the Founder’s Day address in which he gave an update on the University. A lunch followed in the dining hall.